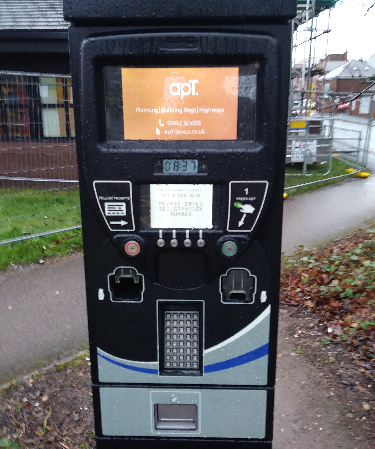 Parking in Telford and Wrekin is a sensitive topic!  Elsewhere around the country Councils and cities have all introduced parking charges as a way of generating income.  It is a tax on driving but as demand to drive is high there is seemingly little resistance and an acceptance of having to pay to park.  Telford is a little different though our residents and previous administrations have held on to Free Parking as a Unique selling point of Telford.

It is true that times are harder now financially and our local authority is no different to others in that it’s budget has been reduced due to the austerity nationally following from the Credit Crunch and dreadful mismanagement of the economy by Gordon Brown.

However the Local authority is now moving forward with On Street Enforcement this is put forward nationally and locally as a traffic and parking management policy but everybody knows (and I know more than others as I was a main Board Director of a large Parking Services PLC back in the days of the 1991 Act) that is about raising revenue. 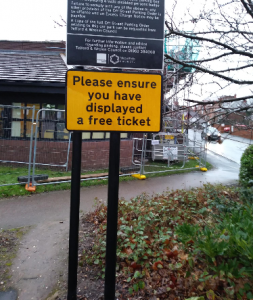 We are now seeing the first signs of this.  For example our Free Car park at Walker street now has some of the £40K approx of state of the art parking meters and talking with residents this week it seems that parking tickets are being issue already if you don’t enter your registration and get a free parking ticket.   For residents in Muxton who travel and work in Wellington that seems a very expensive approach if parking charges are planned to remain free.

Residents suspect therefore that Parking Charges are planned post 2nd May 2019 so bad news can be managed after the local elections in Telford.  I raised this on twitter and got a robust response from Labour so clearly they are sensitive about it and at present strongly deny that parking charges are planned or proposed.

Speaking with a random selection of people using the Walker Street Telford car park they all laugh about the Free charge and expect that charges are coming in and soon, no smoke without fire one resident said.   Another said just wait until after the election when there will be another round of “cuts” and parking charges will be needed reluctantly to be introduced in response with the finger of blame as always pointed at central Government. 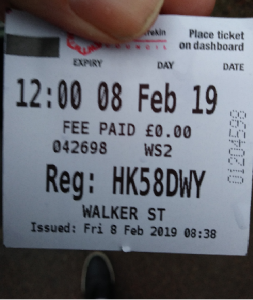 In other towns On Street Enforcement is used to fine drivers for parking illegally and it does not deter much as the ticket levels vary very little from year to year, but what it does do is push vehicles to nearby car parks which are usually Council owned and have their rates increased, that way there is a DOUBLE PARKING WHAMMY in that Councils gain from on street parking enforcement income and from the introduction or increase in parking charges on Council owned land.

I personally am against On Street Enforcement because I know the reality of it having run contracts like this as an Operations Director, however whoever wins on 2nd May 2019 I will continue to argue against Parking Charges.

Hopefully it will be the Conservatives.