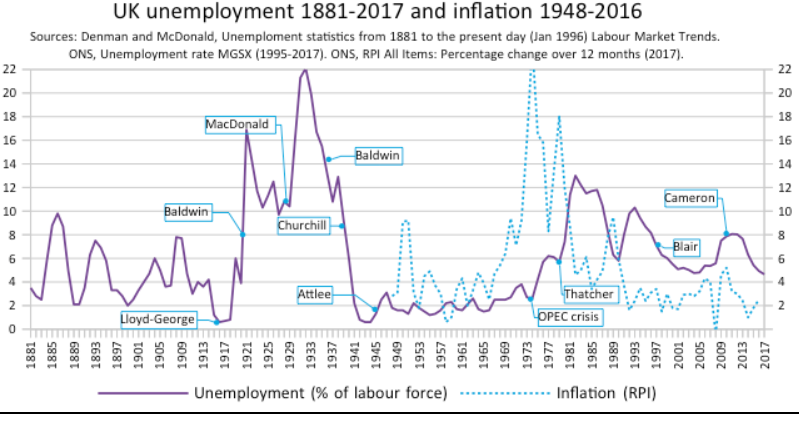 I’ve been saying this for some time, but there is every chance we will see unemployment falling back to the levels the UK enjoyed prior to the great depression back in Lloyd George’s time 1917!  The big factor in all of this and what makes this believable is the independence of the Bank of England. 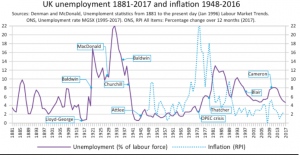 What is interesting about the graph is how the PM at the time is highlighted on the graph, Thatcher and Cameron and even Blair to some extent all played a part in this change of mindset and a very welcome one it is.

Business and the public have adapted to the new order and combined with this we are seeing GDP expand not least because the living wage is driving up wages and with it overall demand in the economy.   For some time I’ve believed that large falls are possible because there is a buffer of economically inactive people being students, live at home parents and the retired all of which are being attracted into the work force to take the benefits of what is on offer.

Politicians just were not good at controlled monetary policy but the Monetary policy committee by contrast has been very good, very very good.  It just goes to show the less inexperienced politicians have to do with economics and the management of economy the better.

Our next phase of economic development needs to include a reduction in income taxes so there is more incentive for the wealth creators to work and put in more effort.  Reducing the basic, higher and additional rates by 1% each would be a great start!