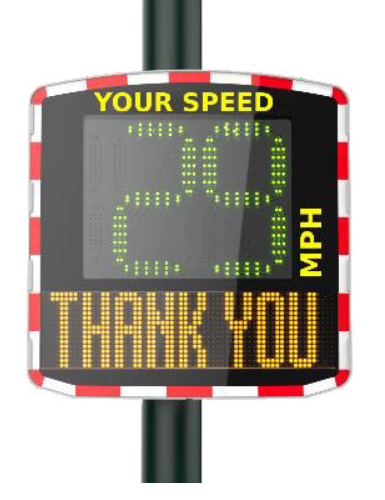 We’ve been having good feedback from residents on the Speed indicator signs that have been put up on Marshbrook Way, they do act as a deterrent.   This was an initiative from Donnington and Muxton Parish Council on which I sit and represent Muxton along with Cllr Nigel Dugmore.

Other highways measures are being considered for Marshbrook Way as there does continue to be a speed issue.  One option which I personally favour is to remove the white lines from the road completely.   This may sound somewhat strange but in other authorities where this has been tried it does reduce the average speed as drivers become more uncertain about the road and respond by driving slower.  Sometimes Psychology is better than capital spending!  The other advantage to that proposal is that it reduces the cost of white lining.

I will continue to consult with residents on this issue and whilst not a high priority for Telford and Wrekin Council I will continue to press for it to be given more priority in the list of schemes being considered by the highways team for funding.

Whilst the Council does make a lot of the funds it is investing into highways there does remain a considerable backlog of works needed to bring our highways up to standard and because of this the list of project request is something like 10 years of funding in length.  Each year the Cabinet member gets the task of selecting the ones to go ahead, with officer advice.

There have been similar requests for action on Wellington Road and these are further progressed, and because of the greater user number of that road are further up the priority list for T&W.

On a similar note our plans for quiet lane status for Muxton Lane is moving forward and we are consulting with the public further on this at a public meeting on Wednesday this week 13th February 2019.